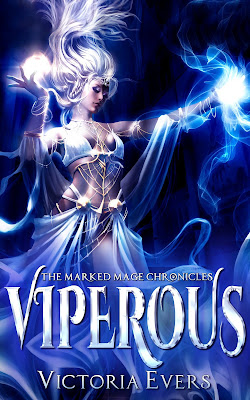 When I’m through with Heaven, even the Devil will admire my work.

They did their best to destroy everything I hold dear, but Heaven made one fatal flaw — they didn’t kill me when they had the chance. You don’t attack the ones I love and get away with it. I never asked for this. I never wanted to become what I am.

But the path to Hell isn’t paved with good intentions. It’s paved by the retribution of the worst kind of monsters. The ones we create. And Heaven is about to face the deadliest of their makings.

Return to The Marked Mage Chronicles with the seductive, thrilling new installment told from the perspective of Kat, Reese, and the Crown Prince himself.

WARNING: This book contains strong swearing, violence and sexual content. What can I say? Our Prince has a dirty mind and mouth.

In anticipation for Viperous, book 3 of The Marked Mage Chronicles, I'm giving readers a little taste of the Crown Prince's perspective, in the form of a re-telling.

[This takes place in Insidious, from the time Kat ignites her Pride rune up until the end of the make-out session between Kat and Blaine in the weightlifting room, told from the Crown Prince's perspective.]